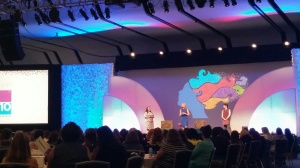 If you’ve never heard of BlogHer before, it’s one of the most influential blogging networks for women online. They are so influential that presidential nominees in the United States have sought their approval and influence in the past two elections. Besides its political influence, BlogHer is a great resource for women both seasoned and new to blogging. BlogHer provides community, collective bargaining power, exposure and advertorial magnetization resources to its members. Founded in 2005 by Elisa Camahort, Jory Des Jardins and Lisa Stone, BlogHer has grown over the past decade to an astounding reach of more than 100 million visitors a month.  It’s fair to say that they are kind of a big deal and the crowd you want to be in with. This year, they held their tenth annual conference appropriately in Silicon Valley, where they held their first conference and started as an organization. However, this year brought over 5,000 attendees. END_OF_DOCUMENT_TOKEN_TO_BE_REPLACED

Get A Free Domain With Any Hosting Plan By Entering Your Email Below!